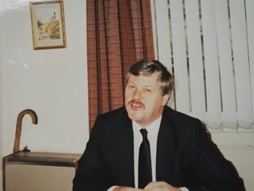 We are sad to advise that one of our founding Partners, Bob Clayton passed away at his home on Saturday morning, 6th March, after a short illness.

Bob started his career as a Chartered Surveyor in the 1960’s with Local Authorities in Leeds and latterly Preston. It was here that he first met Clive Eckersley when they worked together in private practice in 1970. Their careers followed different paths for the next decade, but they came together in the early 1980’s as partners in a prominent estate agency located on Fishergate, Clayton Booth and Partners. This practice was eventually acquired by the major Insurance company, General Accident and integrated into their national chain.

In 1990, Bob and Clive resigned their directorships with General Accident and formed Eckersley as a new commercial property consultancy.

Bob was responsible for the professional work within the practice and secured accreditation on all the major high street Bank Valuation Panels, a recognition of his ability and integrity, and a legacy which endures today.

He was a popular and well respected member of the business community in Preston prior to his retirement in 2000, and continued to be a member of Preston Golf Club and Preston Grasshoppers.

A loving family man, Bob is survived by his Wife Valerie and Son and Daughter, Paul and Dawn, and his Grandchildren and Great Grandchildren.